Director of Engineering Chuck Chase – Designing for the Future 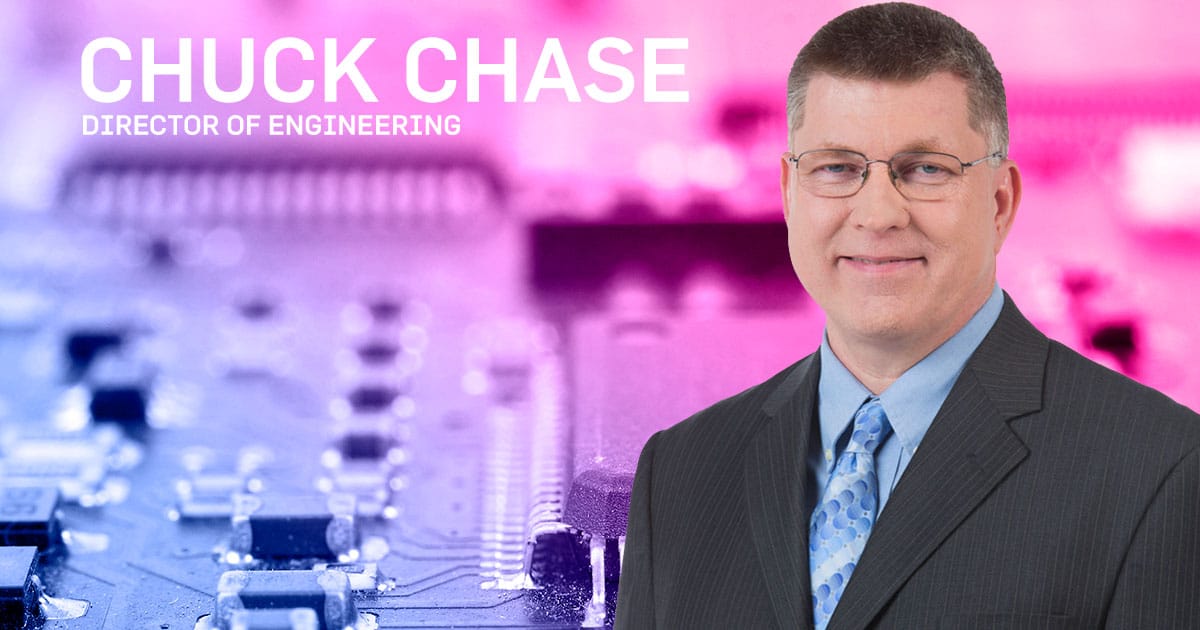 Why the customer always comes first in every engineering development.

Director of Engineering Chuck Chase is celebrating an anniversary in January 2021: eight years at MJS Designs. He was born and raised in Grand Junction, Colorado, and earned his bachelor of science degree from Colorado State University. The Valley of the Sun called him early, and Chuck moved to Phoenix for his first job, at Motorola, shortly after graduation. He then earned his master’s degree in electrical engineering from Arizona State University.

Chuck worked for Motorola and then McDonnell Douglas for five years, and then went on to be director of engineering and operations for FLIR Radar Systems for 18 years. That is where Chuck first got to know MJS Designs, which partnered in building hardware for FLIR. “I had MJS building two different radar systems for me. That’s how I got to know Dawn Northrop, MJS Designs’ president,” said Chuck. “We had a really good working relationship.” When FLIR shut down operations in Phoenix, Dawn approached Chuck to see if he would be interested in joining the MJS Designs Team as the director of engineering. Chuck was happy to join the team.

Chuck’s role encompasses myriad aspects: electronic circuit design, design documentation, electronics assembly testing, PCB design support, and customer interface. Quality and customer satisfaction are always at the forefront of his commitment. “We rigorously adhere to our Eight Unwavering Standards,” said Chuck. “We strive to always exceed expectations for the customer in terms of engineering design quality, manufacturing, and design documentation. We stand behind our products. We go the extra mile for our customer, and it shows. We build exquisite hardware that you put on the bench, you fire it up and it just works.”  Chuck experienced this firsthand as a customer and continues to implement those standards as he leads the MJS Designs engineering team.

MJS Designs sees a wide variety of projects and technologies, far more than the average engineering design team. This keeps the work fast-paced and interesting. As the engineering team never knows what type of technology will be required on an upcoming customer project, Chuck must ensure MJS Designs stays up to date with the latest engineering technology.  As an example, he reports that the company has expertise with all of the new wireless technologies (Bluetooth, Wi-Fi, Zigbee and others) to support customers’ wireless communications requirements.

Chuck says that, during his time at MJS Designs, the fundamentals of the job have not changed much, but the tools and technology have improved significantly. He notes that the company is looking at new technology for the future, including signal integrity and reliability estimation software. MJS Designs also plans to acquire a 3D printer in order to in-source mechanical options for customers.